Arenas of the Ancient Guardians 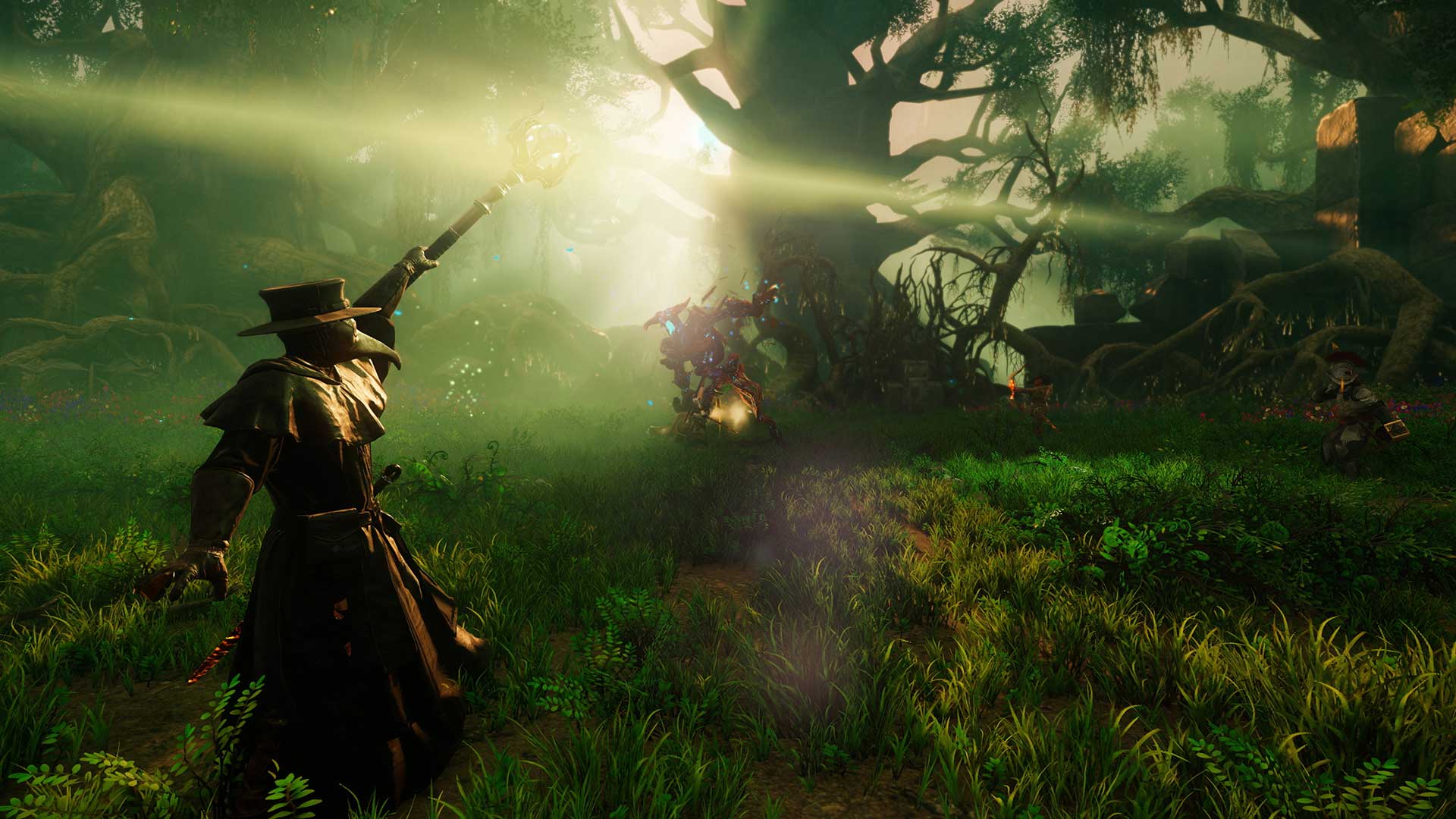 On your adventures and trials in Aeternum, you’ll stumble upon mysterious and timeworn structures. Clearly constructs of the Ancients, the true purpose of these Arenas has been lost to time. Through unknown magic and ritual, the Ancients were able to bend the laws of Aeternum and bind some of its most powerful denizens within these structures. Even the daunting challenge of finding the proper Key to access these Arenas pales when compared to then martial trials that await any group of adventurers who dare to enter. 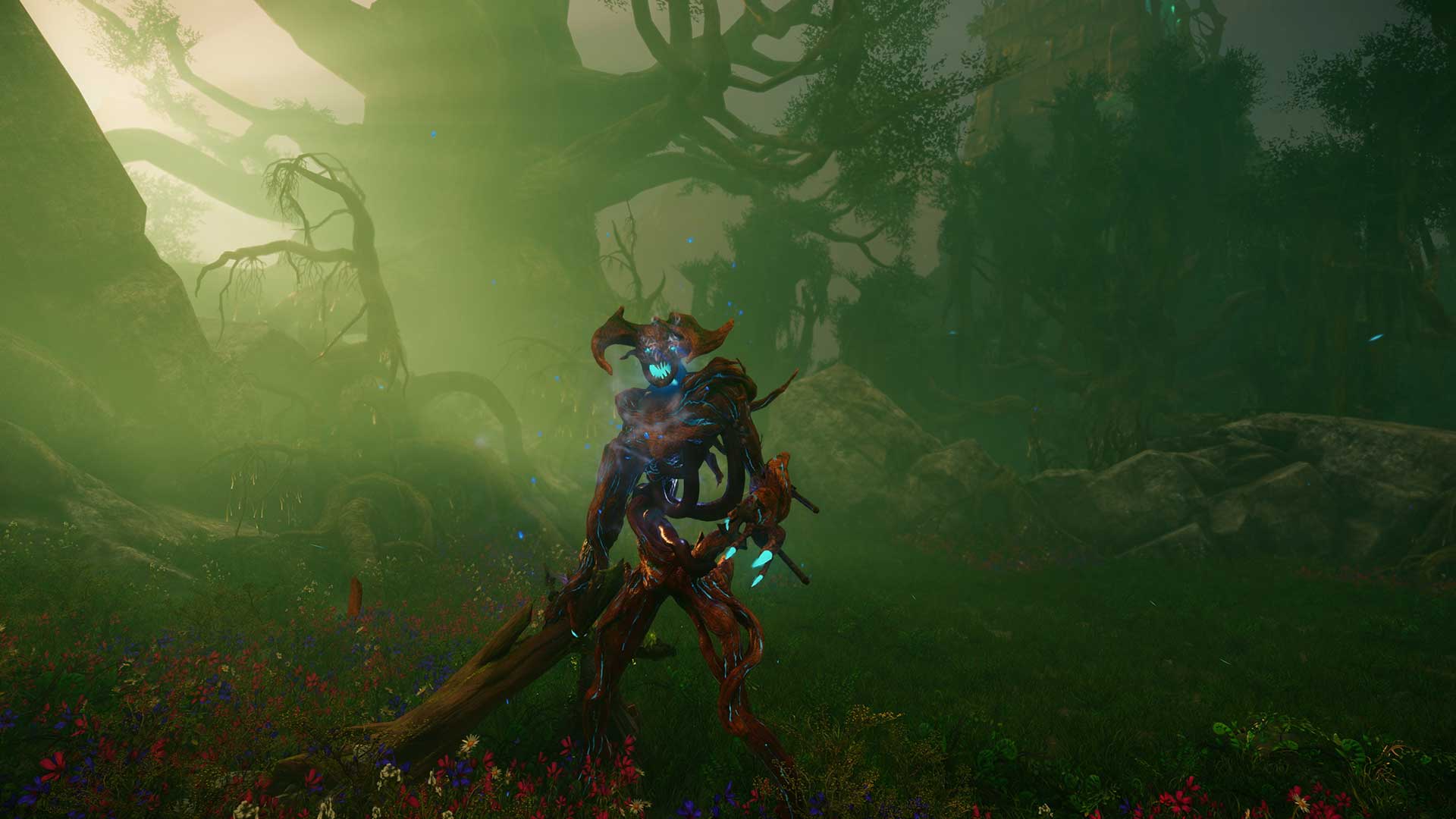 Once inside the Arena, you’ll encounter one of the most powerful creatures on Aeternum, the Spriggan. Born of the land, it is a primal expression of the power of Azoth. Don’t be fooled into thinking its gnarled limbs are stiff or its movement limited. This champion of the Angry Earth is as swift as it is deadly. Overcoming this foe will reward you greatly but it is no small task.

As you slay particular enemies in New World and dig through the loot they drop, you’ll occasionally come across a Spriggan Key. Along with the Key comes specific coordinates on where you need to go to use it. Upon reaching your destination you will find an ancient, vine encrusted pillar. From there you can turn in your Key and be teleported straight to the Arena. Anyone grouped with you at that time will also be teleported if they are standing around the pillar.

Once inside the Arena, your battle against the terrifying Spriggan will begin. You’ll only have a set amount of time to best this enemy so you’ll need to make sure you go in prepared. It’s always wise before teleporting into the Arena that you repair your weapons and armor and craft plenty of anything you think you might need. The Spriggan won’t go down easy. 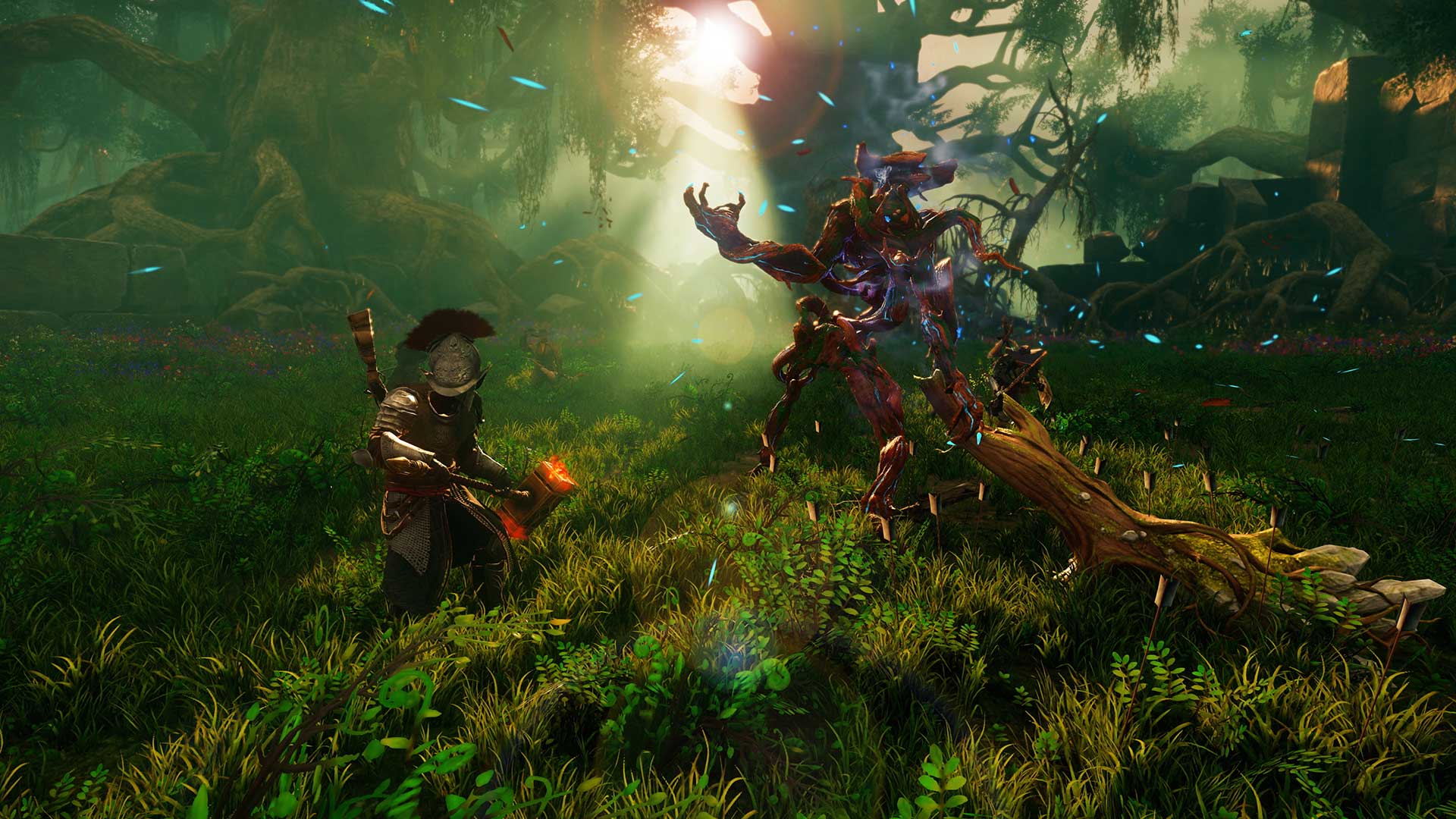 If you’re skilled enough (and maybe even a bit lucky) and you do manage to take down the Spriggan, you’ll be handsomely rewarded for your efforts. Success in an Arena awards high-quality equipment, but in rare cases they can also award Legendary Gear with powerful equipment traits. Some of the most powerful gear in the game comes from defeating these Arenas. 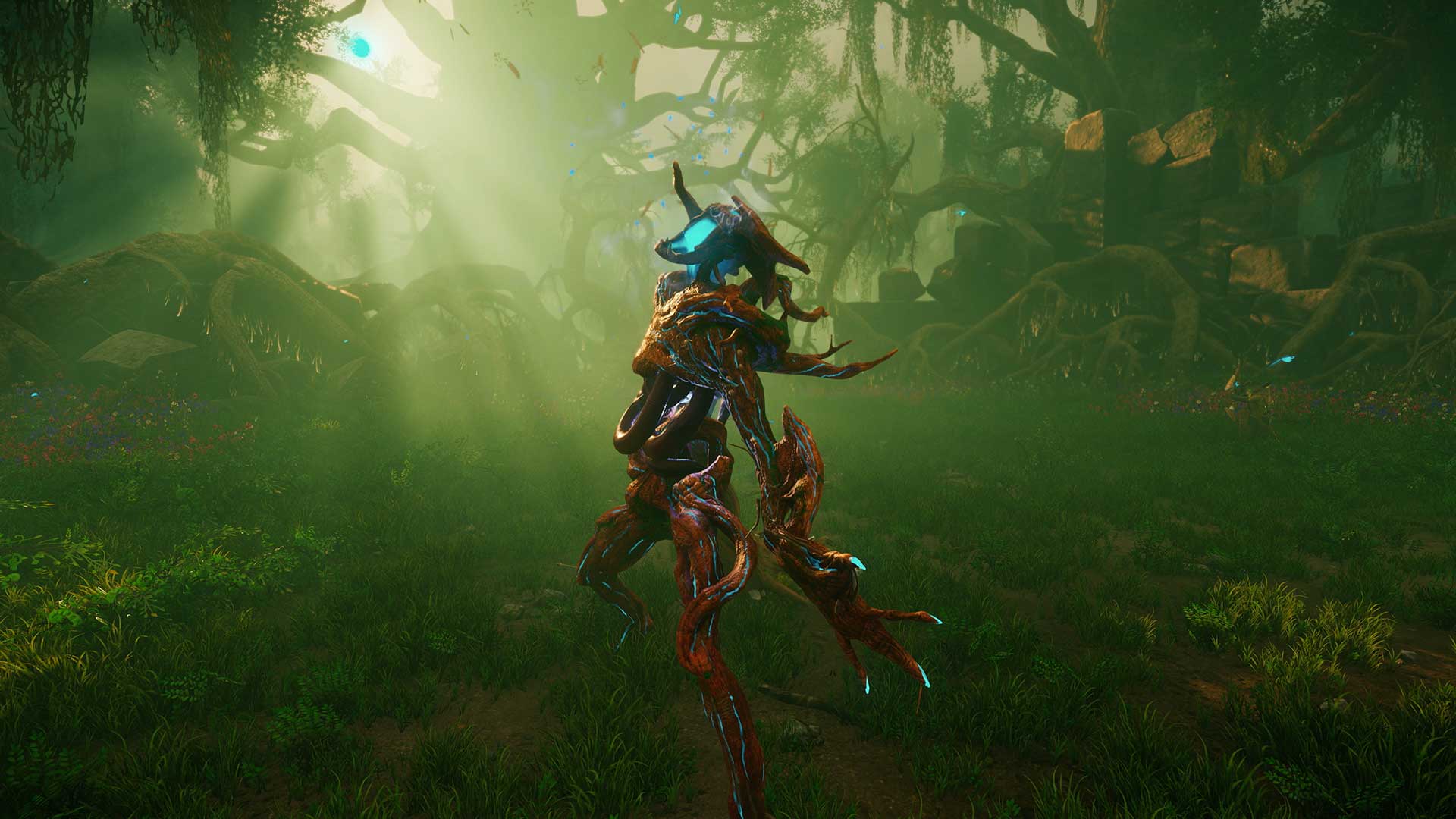 If the time runs out or everyone in your party has been stomped under the crushing power of the Spriggan, your experience in the Arena will come to an end. All players will be unceremoniously teleported back to the ancient pillar where your encounter began. Want another go at besting the Spriggan? You’ll need to track down another Spriggan Key out in the wilds of Aeternum.

Q&A With the Team

We sat down with the Art and Design team, digging deeper into what it took to bring the Spriggan to life. Here’s what they had to say. 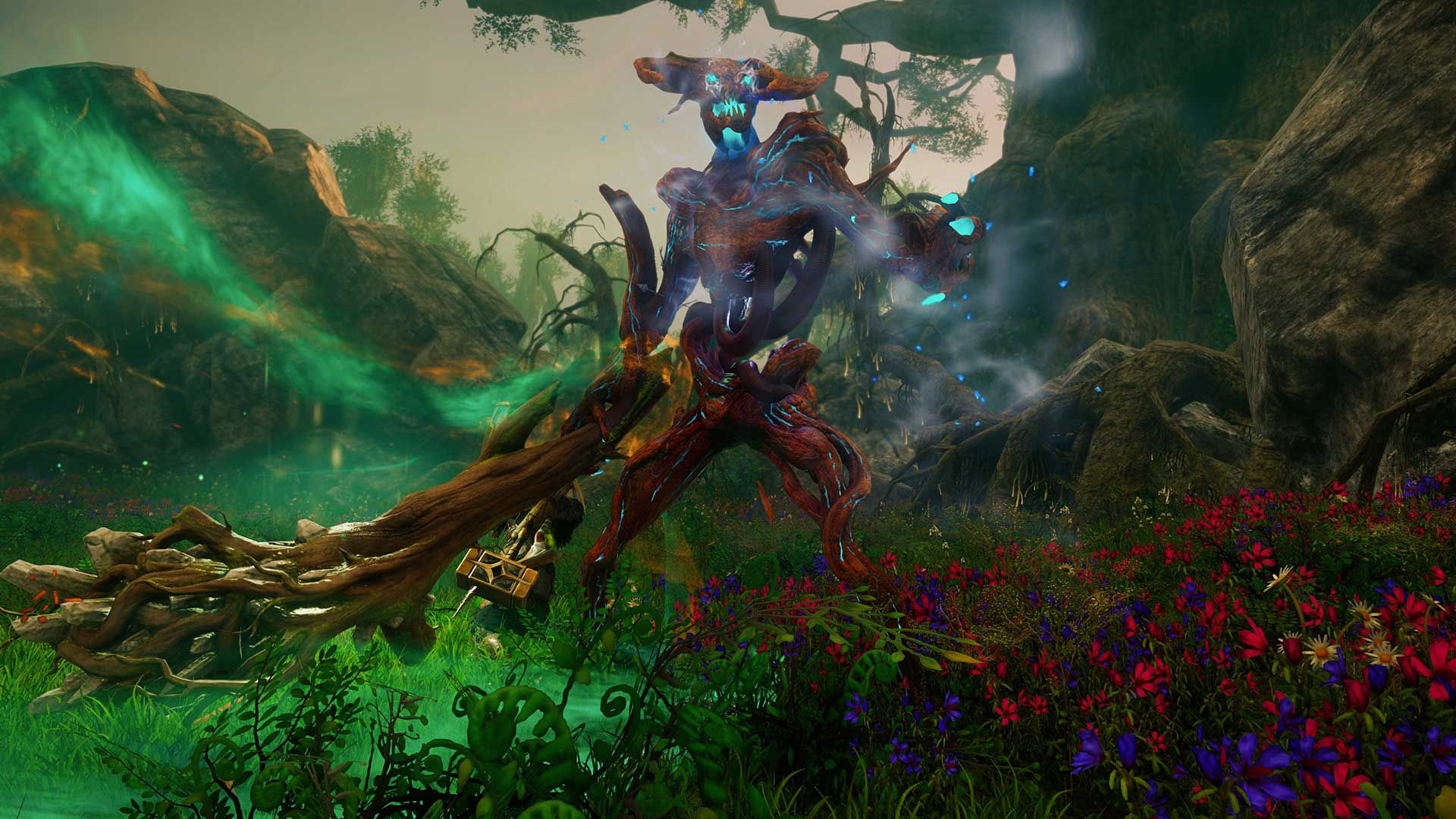 The Spriggan originated in English folklore and has seen many iterations over time. What were some of the early concepts the team drew inspiration from?

“In the earliest concepts for the Spriggan, we designed it as an earth elemental, a spirit of earth, wood, and stone, drawing on descriptions that show up in early folklore from multiple cultures. The creature initially had a tree stump as its core element, but it had a lot more rock armor and took on a ‘tank’ posture. Over time the creature grew into more of a ‘boss’ so it slowly evolved to a taller more agile form that relied less on armor and brute strength, more on mobility, combat skill, and its supernatural powers.”

What was the design philosophy when creating its combat style?

“When we were creating the Spriggan, we wanted to create this powerful being in which the root of their power stems from the earth. Of course, this power is also corrupted and very angry, so we wanted to create something that was large, frightening, and that conveyed an angry power in all of their attacks. We designed it to have a body of wood, earth, and stone that was created by an evil force of corrupted nature. After that, we put a lot of thought into how it can use this body, such as the growing roots and vines for attacks, along with the large club it uses for a slew of melee attacks. We also wanted it to be able to tap into natures power to heal, and that is when we came up with the idea for it to have a shield of roots that cover it so that it can regen. All of these elements combined has created what we now know as the Spriggan. 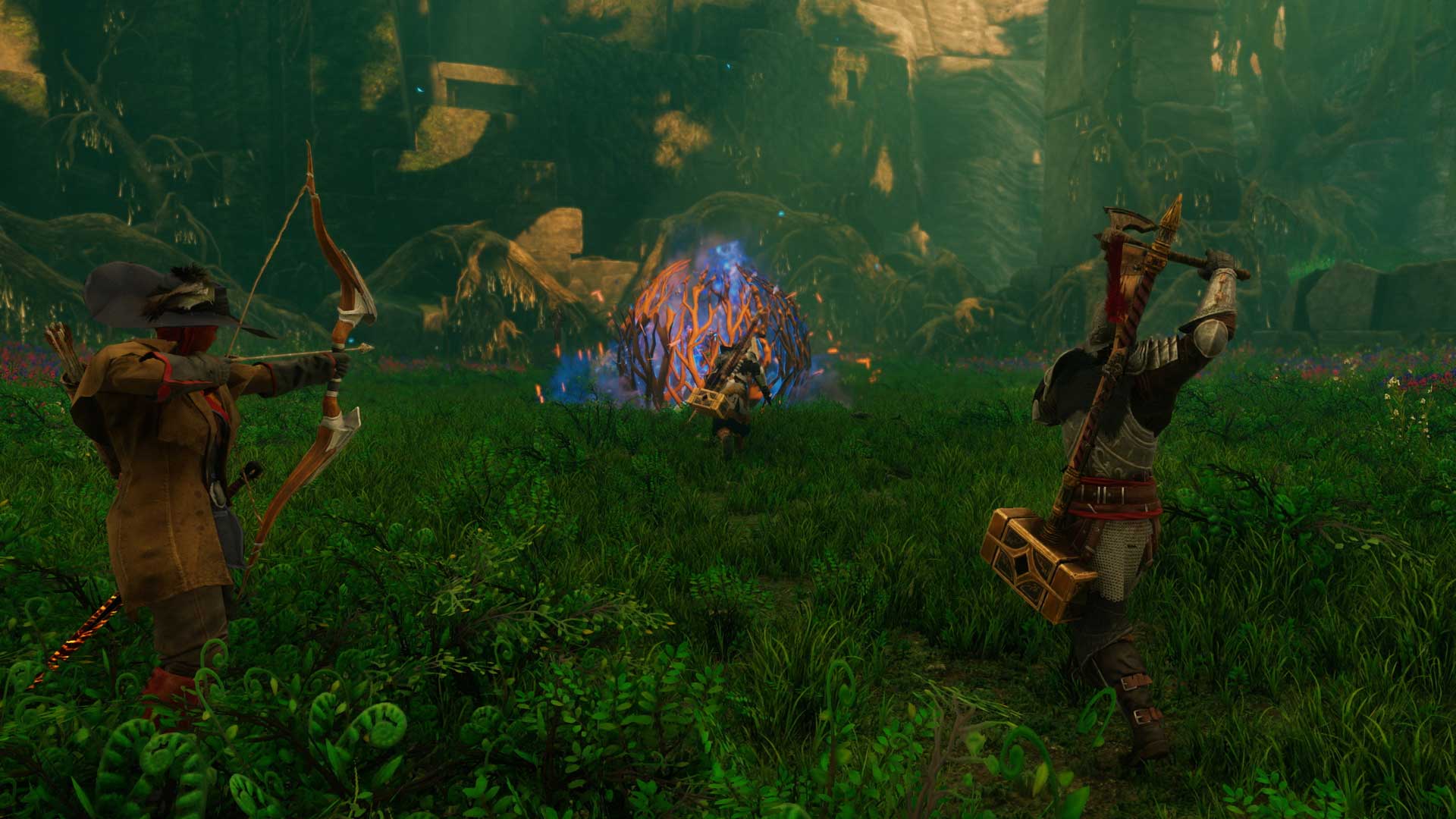 On the animation side of the Spriggan we wanted its personality to feel threatening, ferocious, and magical. This creature is born from the surroundings it lives in and we wanted its attacks to suggest that. We really wanted to push an uncontrollable feeling to a lot of its combos, with wild swings and slams giving the sense of rage and raw power to every attack. Based off of the design, the Spriggan needed to be swift on its feet with the ability to quickly close down the player at any distance. No one can hide!“

Do you have any tips or tricks we should know before encountering the fearsome Spriggan?

“One of the biggest tips we can give would be to not go alone. Having a well-rounded group is important for this encounter. Melee DPS (damage per second) is definitely needed, but also having at least one ranged and healer build is key. The Spriggan can break through most blocks pretty quickly, since their big attacks tend to deal out a large amount of stamina damage. Staying mobile and using your dodges sparingly is very important for survival as well. Keeping an eye on the attack-tells is extremely important, since it does like to deal with players that are both near and far within a blink of an eye. You want to make sure your weapons are tip top and you have some potions at your side to help. And one final tip would be to look out for their healing shield. When the shield has been raised, they will begin to regenerate their health, so having all players attacking at this point is key. This will stop its regeneration and break it out of the shield early."

Do you have a favorite move or animation?

“I would have to say that my favorite set of moves are the Vine Arm attacks. The animation team put so much time into getting those to look great. We also worked with the Tech Art and VFX team to get the vines built with special adjustable shaders to create the growing and retracting effect. Without a group effort, we would have never gotten the Spriggan to the exciting state that we see today.“ 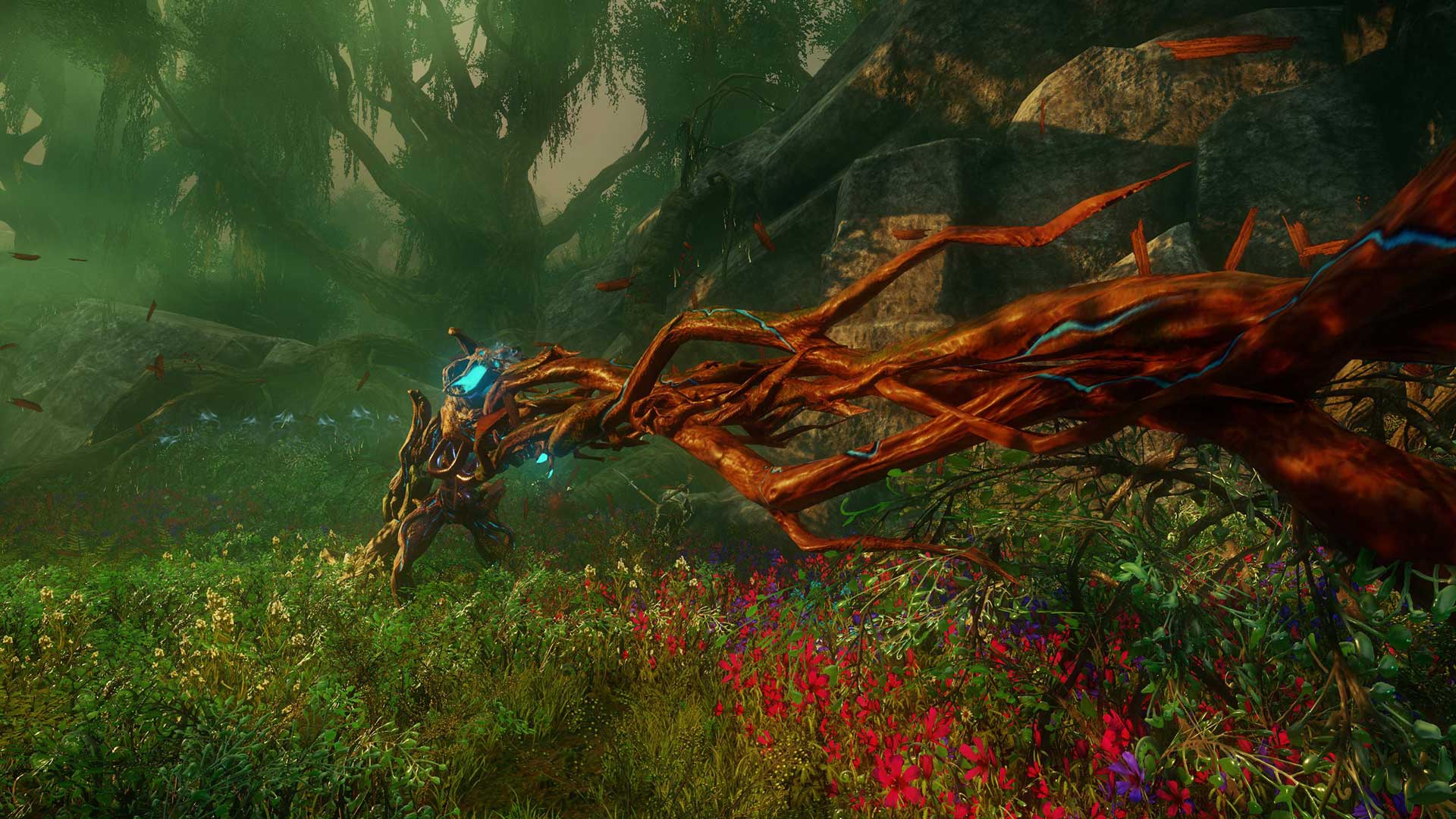 There is so much to explore and discover in New World. Unique and diverse creatures, epic vistas, dense forests, and danger around every turn. Your time in Aeternum will be filled with adventure from the start. Do you have the skill and guts to take down one of Aeternum’s mightiest Angry Earth warriors? 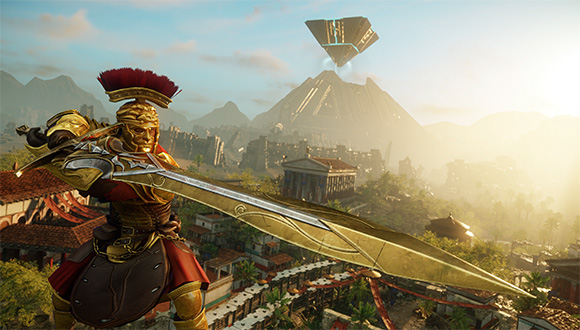 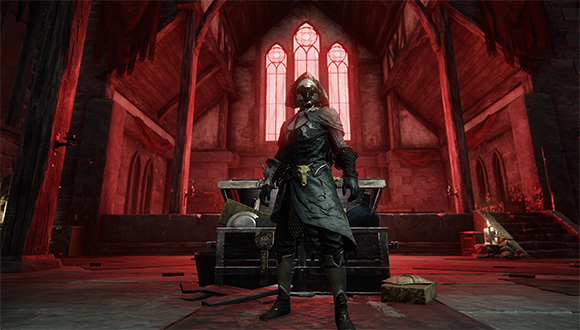