The Making of Brimstone Sands: Lore, Design, and Audio 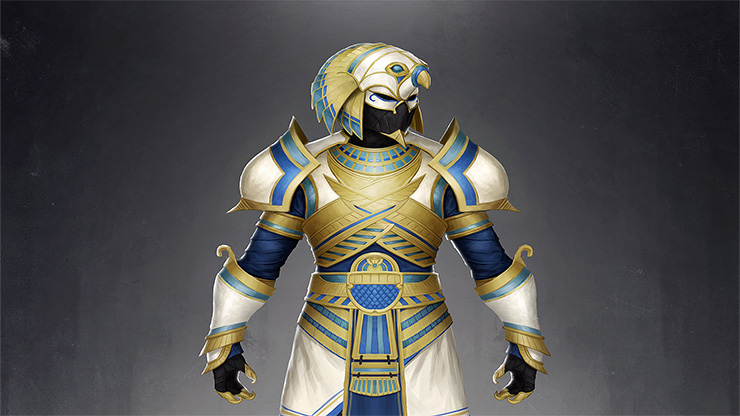 The Brimstone Sands Release is a culmination of in-game lore, Roman and Egyptian mythologies, and lessons learned since New World’s launch. Every pixel was crafted with care by our Development Team, while each narrative detail was carefully woven by our Narrative Team. In anticipation of the upcoming release, we went behind the scenes with both teams to learn more about the making of Brimstone Sands. Let’s discuss the zone’s lore, design, audio, and concept art. There might even be a few fun developer stories along the way.

The Lore of Brimstone Sands

Our journey into the story of Brimstone Sands began with Narrative Designer Aaron de Orive:

“Since New World is set on Earth, we drew upon historical figures and myths to craft the story of Brimstone Sands,” Aaron said. “We wanted an early Egyptian civilization and agreed that an amazing character like Imhotep would be the perfect choice for a prominent character. The zone tells the story of his arrival and the Egyptians’ interactions with the Ancients. We also wanted an era dominated by the Romans, so we incorporated figures from the time of Julius Caesar.” 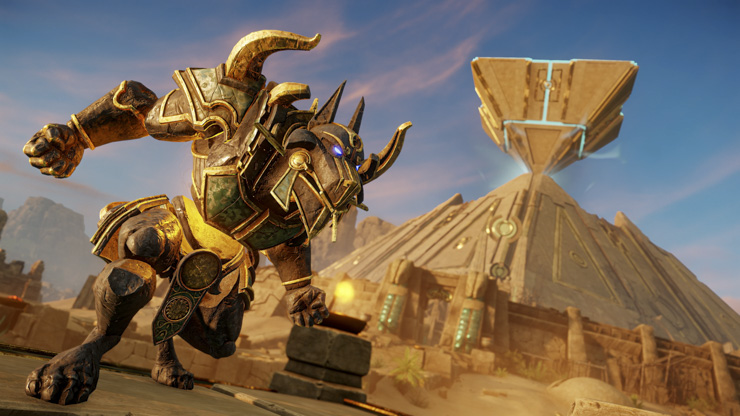 Aaron went on to tease the narrative’s direction. “Exploring Brimstone will reveal the tragedy that befell both of those civilizations, as well as provide more insight into the lore of the enigmatic Ancients and the mystery of the island.”

Our next quest took us to Lead Zone Designer for Brimstone Sands David McKenzie, where we explored many of the key themes behind the Design Team’s work:

“The Ancient Glyphs were originally discovered in a piece of concept art for ‘greebles’ (i.e. small details for world art),” McKenzie said. “The glyphs were so visually striking and unique, and used everywhere from Expedition puzzles to open-world chests, that the natural inclination was to give these some meaning and purpose. What better location to originate the idea of a magical Ancient language is there than Brimstone Sands, one of the oldest Ancient civilizations in Aeternum?”

Thanks to resident Designer/Anthropologist Carrie Berg, the Glyphs were given original meanings based on common symbol shapes found in early languages on Earth. “The Ancient Glyphs were originally going to be just Journal pages that each unlocked a word of the Ancient language, until our World Artists started building stunning Ancient devices and gizmos. The portal and other mechanics began to bear the Ancient Glyphs, and a unique interaction was assigned to them.” 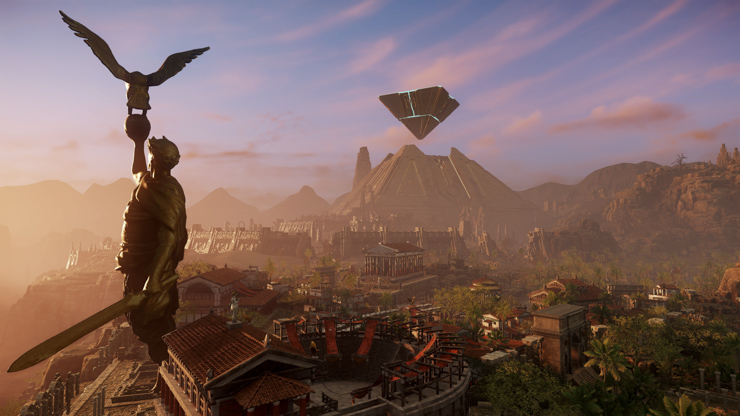 The very first jumping puzzle in Brimstone Sands was the Place of Pillars. “One of our artists, Tirzah Bauer, took the original design and ramped it up to 11, which began a domino effect in a lot of our other points of interest (POIs),” McKenzie said. “The other jumping section that Tirzah worked on was the top of the Acropolis. This experience quickly delighted players, and became the inspirational basis for all of our POIs.”

One of the core pillars of Brimstone Sands is mythology and pantheons. Its significance is apparent with just a glance at some of the zone’s names. “We wanted to create an authentic tale closely associated with Ancient Egyptian and Roman mythologies,” McKenzie said. “One of the most fun experiences was creating artifacts, Named AI, places of interest, and other secrets that referenced these ancient deities and their rites and rituals. The Ennead is a group of nine gods in Ancient Egyptian mythology. Our Expedition is named after them. So we named a POI after each of the nine gods that comprise this pantheon to give them a special significance.” 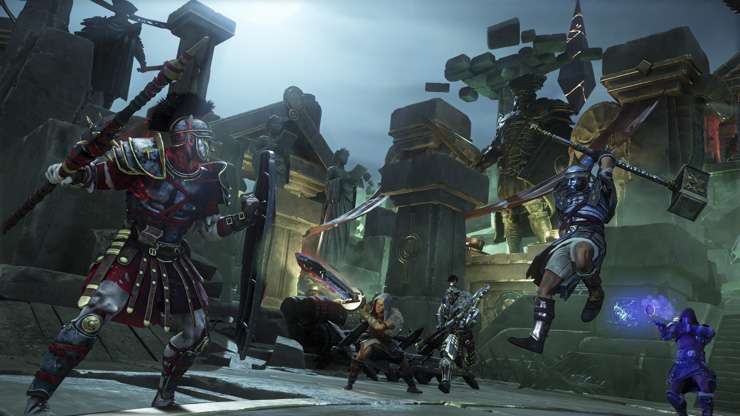 “Developing the Sandworm was a very exciting project,” McKenzie said. “The iteration speed alone was very quick, and took a lot of testing to get right. One of my favorite moments was when we tested the Sandworm. We set its respawn timer to just a few seconds on our developer build. This caused an outrageous number of Sandworms to spawn all over the desert during our studio tests, and almost immediately crashed the server. Despite that, the most common feedback we heard from our fellow developers was how awesome it was - even though it repeatedly crashed their clients.”

The Great Wall of Nebet-Het

“The Great Wall POI in Brimstone is sort of the culmination of a lot of lessons we learned in Brimstone,” McKenzie said. “Verticality, secrets, and the location where players can upgrade their Heartgem and unlock Heartrune abilities all found their home in the Great Wall. The artist who worked on it, Mia DelCasino, did a phenomenal job creating this POI, one of (if not ‘the’) largest POI in New World as a whole. It's filled with dozens of secret chambers blocked by magical walls, connected to our Glyph portal network, and even has an entire Elite Zone packed into it.”

McKenzie also shed some light on a few of the team’s challenges: 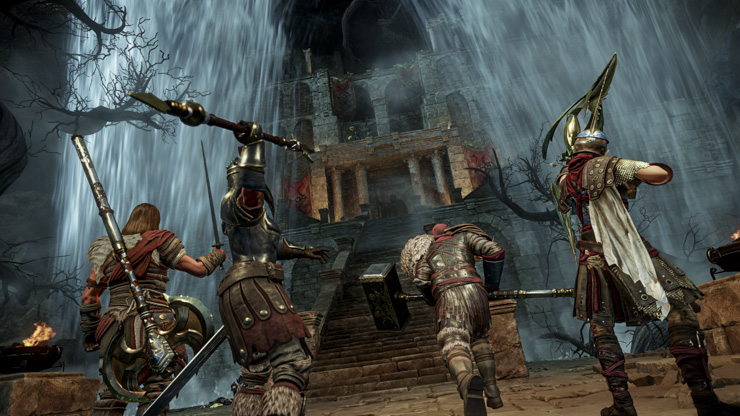 “There is a side quest in Brimstone that challenges the player to walk across an enormous aqueduct towering over the sands,” McKenzie said. “Originally, we asked the player to not only cross it, but once you reached the other side you'd have to drop down, go prone on your belly, and crawl backwards through a small crack in the aqueduct's architecture. This was quickly cut due to tech and budget restraints, but the experience of crawling through a tight, claustrophobic tunnel in some Ancient ruins was a really cool moment. Hopefully we can revisit that experience in the future.”

The Audio of Brimstone Sands

Senior Sound Designer Michael Finley joined us for the final segment of our behind the scenes tour:

Audio Design Concept for the Ancient Beings of Brimstone

"We discovered a strong dichotomy in what the Brimstone Ancients represented," Michael said. "The Ancient Amalgam and Anubians are mechanical, programmed, and automated organisms of the future but still very human like beings at their core, embodying the spirit of human civilization from ancient times. We wanted to capture this dichotomy and join together these two opposing ideas in the sound design. 'Beings of an Ancient Future' was the phrase that we used as our guiding light for the audio concept."

"Our goal was to find the key sound that represented their mechanical physical appearance but also had an emotional spark to capture the essence of what 'Ancient' meant, which we defined as something that would sound human."

"The didgeridoo, an ancient instrument invented at least a 1000 years ago, proved to anchor the sonic identity for the Ancients of Brimstone. We felt it was the perfect metaphor for invoking a sense of a living, breathing piece of technology."

"To us, the instrument helped break from the common digital, high-tech, squeaky-clean, and uniform robot noises typically found in the genre of science fiction. The idea helped us to imagine a more anthropologically authentic mechanical being with a more human-like emotional core."

Check out the PTR to discover more of the lore, designs, and concepts before our Brimstone Sands Release goes live. Thanks for your support! We’ll see you in Aeternum!