Behind the Scenes: Arenas 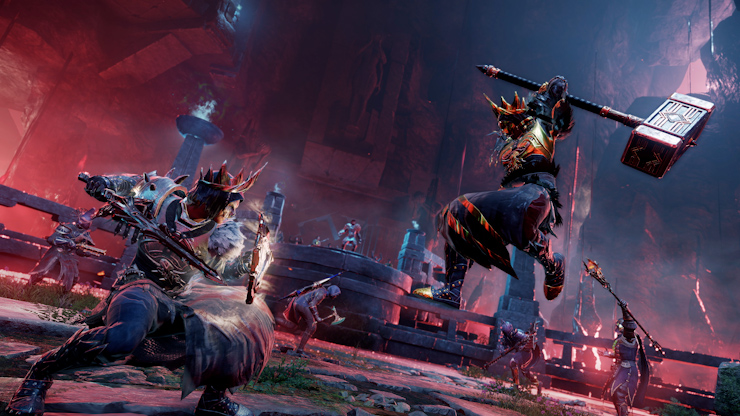 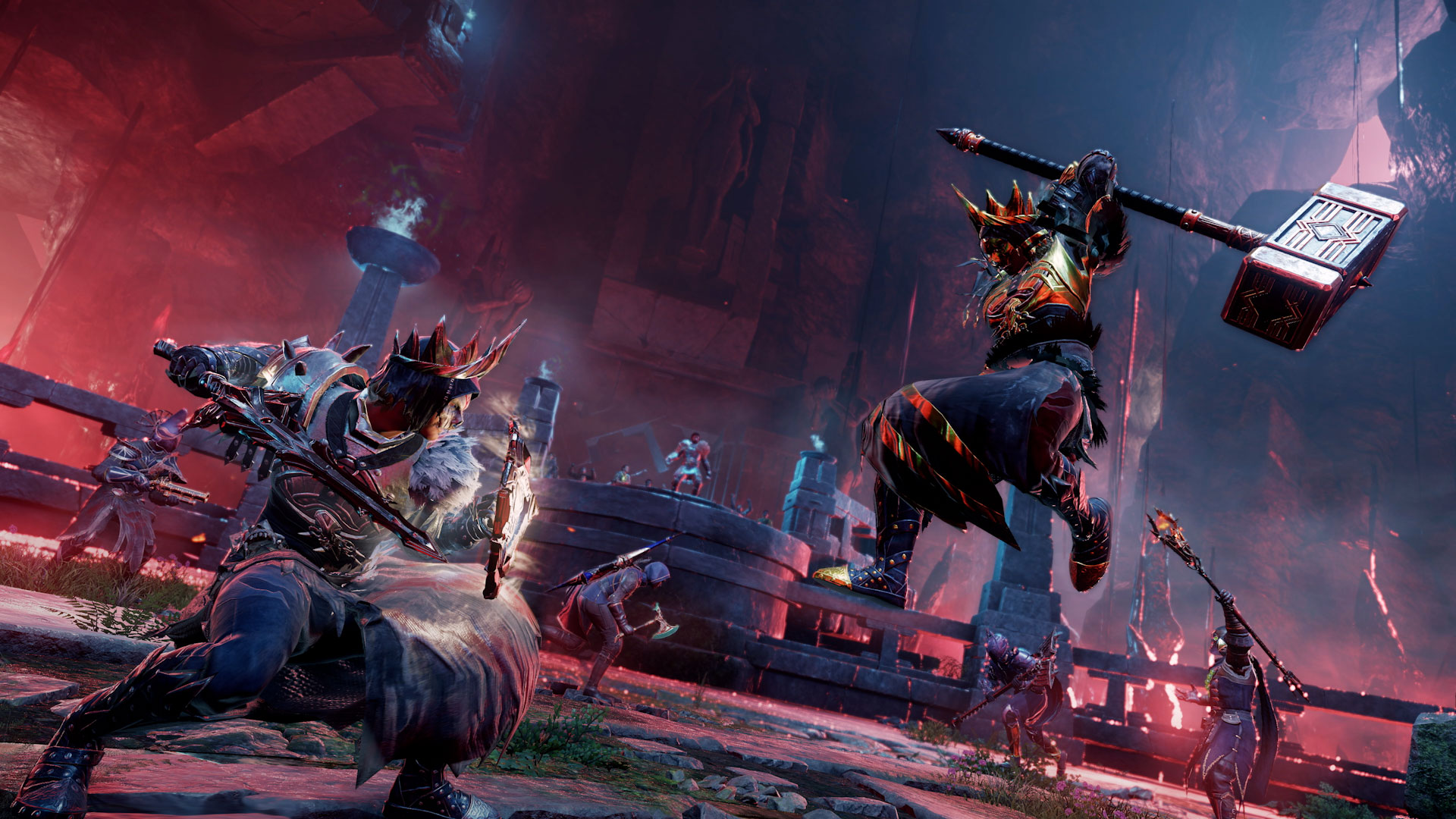 The new PvP Arena requires effective teamwork to quickly defeat the other team, but what about the design details you can’t always slow down to admire mid-fight? New World Gameplay Design Manager David Hall and Game Designer Patrick Smedley joined us for a deeper look at the 3v3 mode’s development, balance philosophy, and announcer. Let’s go behind the scenes for a better sense of how the team strives to immerse players in epic, small-scale battles. 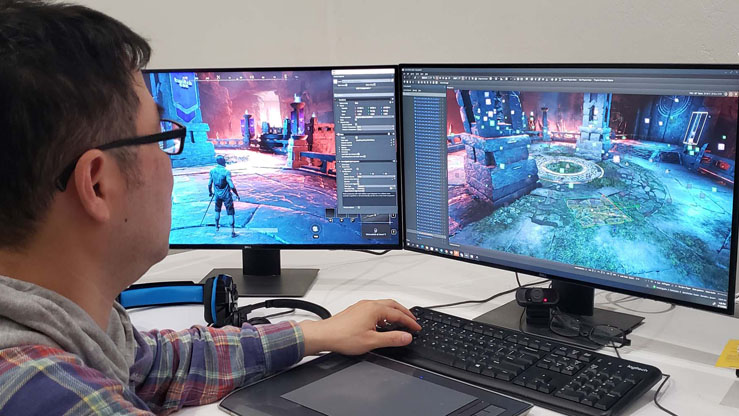 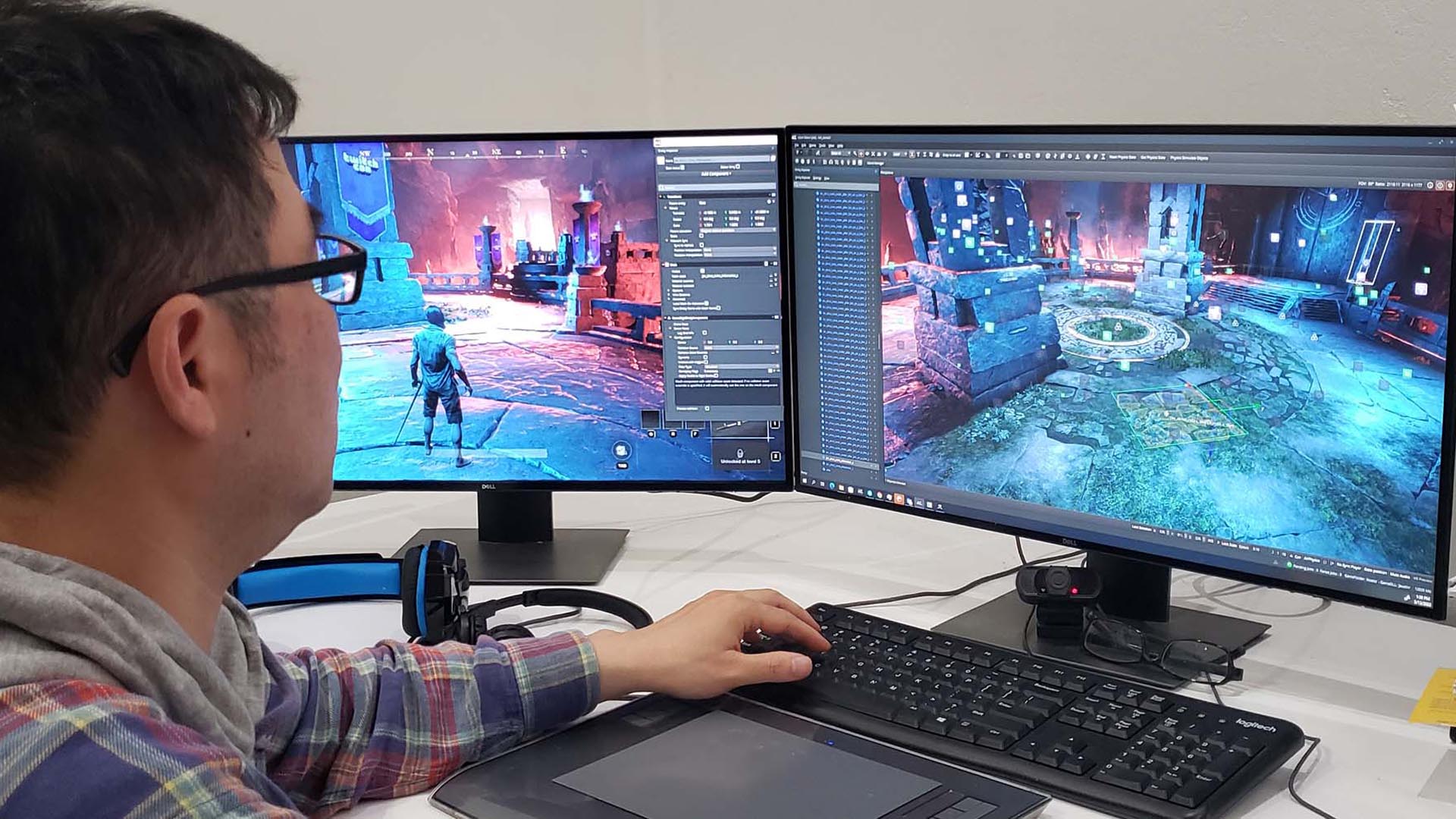 Immersion started well before Arenas came to life in sketches. Aesthetically, Patrick and the Design Team set out to create a battleground that ties into the lore of Aeternum. Corruption looms throughout the outer sections of the Arena, while Adventurers fight around pillars without hazards or other distractions in the ring. This clean design allows players to focus on competitive matches - perfect training conditions for Soulwardens to prepare for their inevitable fight against the Corrupted.

The layout is based less on lore and more around balance. Fundamental questions about player count, match length, and level requirements helped shape a 2D map of the Arena. Next, the Design Team collaborated with artists and engineers to convert it into a playable 3D space.

“Our first pass on the Arena level ended up being way too big and the Arena took quite a long time to run around, which gave ranged players a really heavy edge in matches,” Patrick said.

The Design Team went on to shrink the Arena twice to achieve their goal of a tight, focused mode that gives neither melee nor ranged playstyles an advantage. Following PTR feedback, they also adjusted the pillars’ placement to better block initial lines of sight. 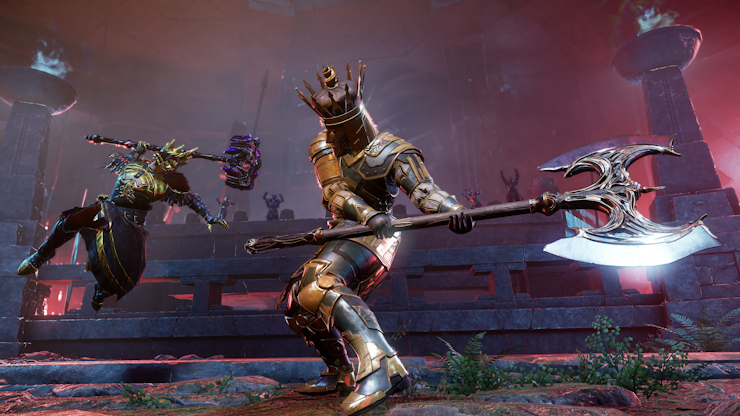 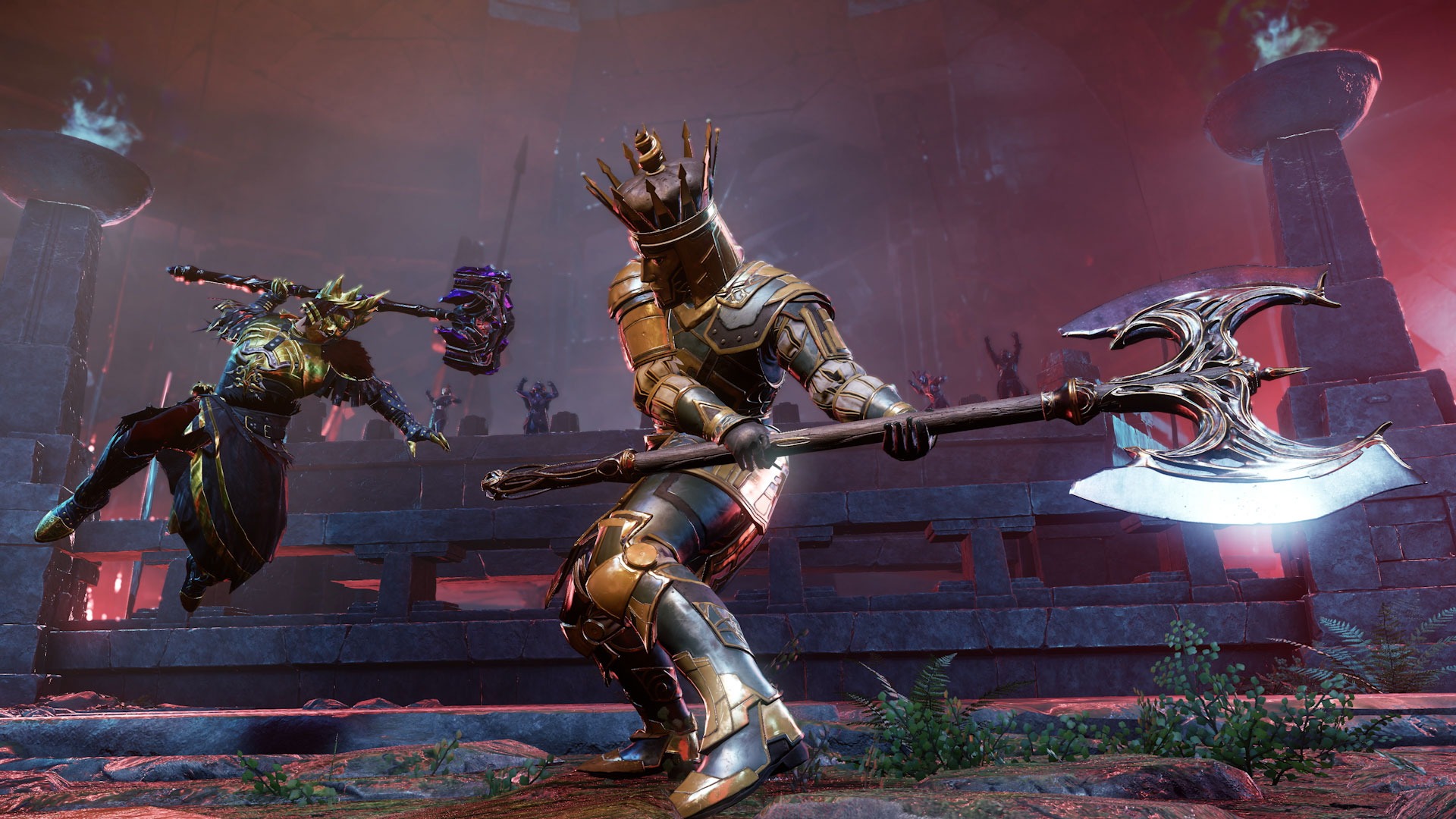 According to Patrick and David, the New World Design Team wanted combat to shine in a small space where players could outsmart and outplay one another without feeling the need to use weapons in the current meta. Early playtests undermined that intention because the Life Staff felt like a competitive requirement. However, the team’s decision to introduce a healing debuff is more than a simple balance solution. This change helps make Arenas all about playing your game, your way.

Let’s breakdown the impact of that Life Staff debuff in more detail. There are 13 weapons in New World. Every player can equip two weapons and each one has two unique skill trees. If at least one player must use the Life Staff to even stand a chance of victory, then your team has drastically less options for different weapon combinations. Strategy and counterplay also suffer because at least one person must know how to use and fight Life Staffs. The Design Team plans to stay on top of weapon balance through player feedback.

“I’ve loved watching New World community personalities check out Arenas on the PTR and I can’t wait to watch strategies evolve once the feature is live,” Patrick said. “I make sure to check the forums almost every day and go through feedback, so the experiences our players have with this feature will really help drive future development on it.” 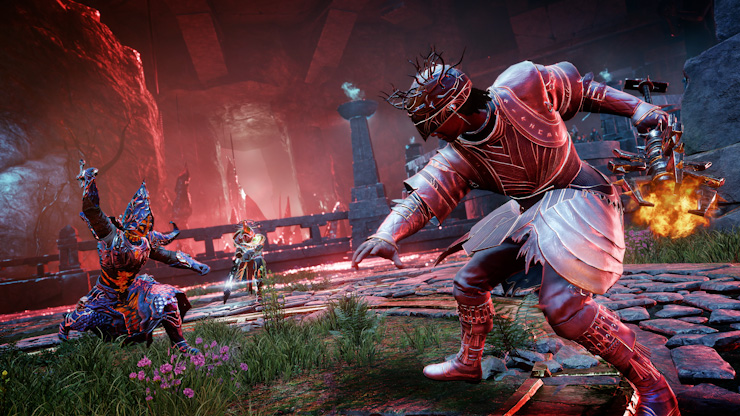 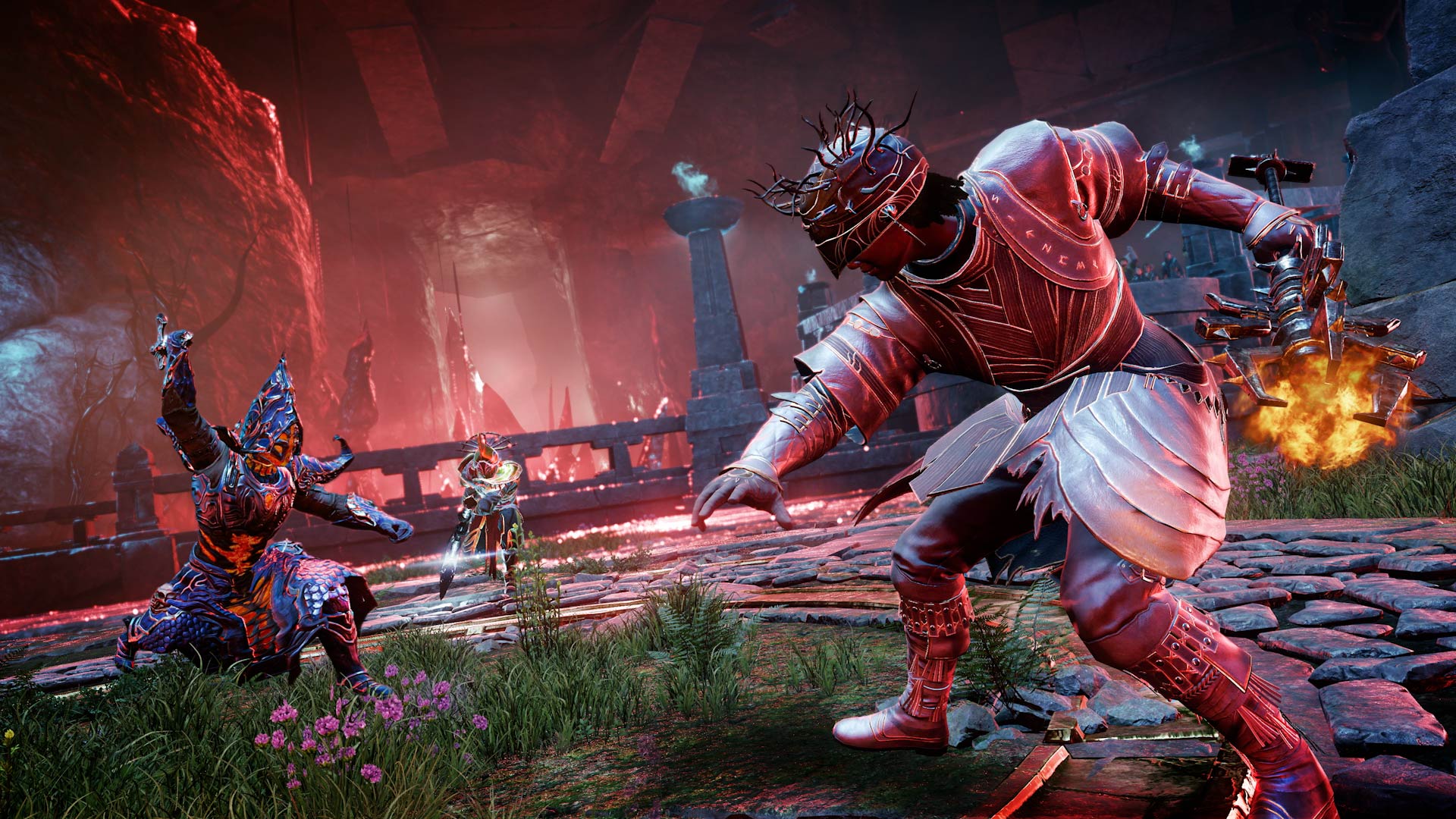 Community feedback was another major influence for the Design Team to create Arenas and remove big barriers to entry. So, how does the team aim to make Arenas more enjoyable for every type of player? Design choices such as:

“We didn’t want players to feel like they needed to spend hundreds of coins in order to enjoy the game mode,” Patrick said. Equal consumables and similar levels across teams reward skill, coordination, and communication, but victory isn’t the only intended way to have fun in Arenas.

Patrick and David hope those little moments when players come just one reload short from wiping out the other team, or fail to win with the numbers advantage will be just as memorable as any big win. Win or lose, take advantage of these quick matches to improve your combat skills for all of the different PvP opportunities throughout Aeternum.

One of the stranger challenges the Design Team faced was how to handle the new mode’s announcer. The announcer began as a way to make Arenas more of a spectacle regardless of if you prefer to unsheathe your weapon in the ring or watch your favorite players from the stands of their Twitch channels.

As development continued, the team explored several positions for him like a floating platform that circled the Arena. This was a great spot to hype up the crowd, but similar to announcers at major sporting events, the developers felt he should be inside the stadium on one of the primary platforms. A crowd was then placed around the announcer and up in the rafters. Now it’s hard to imagine any strike or shot without those fanatic cheers.

“We love the precedent that the announcer set, and any future features like this would definitely be up for consideration for an announcer of their own,” said Patrick. “Who knows, maybe you’ll meet the announcer out in the world in Aeternum sometime soon!”

Thanks for supporting your faction in PvP battles throughout Aeternum. The Design Team can’t wait to see how players will interact in the Arena. Look forward to tuning, balance, and maybe even rule updates based on community feedback following the release of Arenas in the next update.